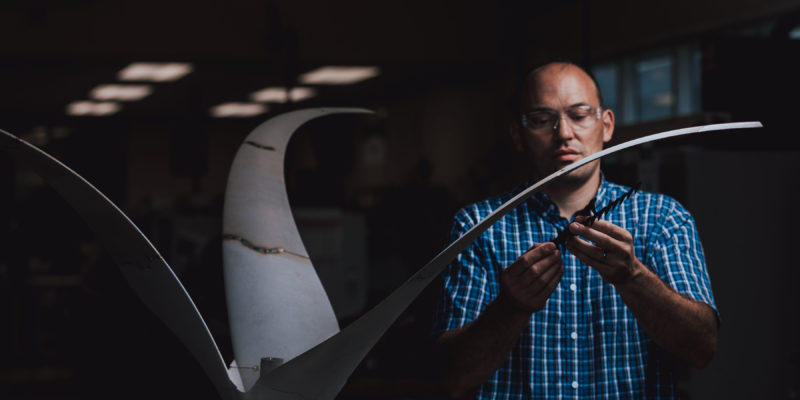 Global engineering technologies company, Renishaw, has collaborated with the Nova Scotia Community College (NSCC) in Canada, to produce two ocean turbine parts using additive manufacturing (AM) for industrial design firm Biome Renewables. Renishaw helped manufacture a PowerCone® retrofit that co-rotates with the turbine’s rotor and curved propellors to reduce drag. Using metal AM to produce these parts reduced costs by 80 per cent and meant that two turbine components could be developed in two months.

Biome Renewables is an industrial design firm based in Ontario, Canada, that specialises in designing wind turbines. It approached NSCC when it decided to expand into tidal wave energy because of the college’s specialism in ocean technology and its engineering research facility, which builds prototypes for different  industries. The plastic solutions used by NSCC were inappropriate for tidal environments and so it decided to use metal AM to make the parts stronger. It approached Renishaw for technical assistance because of its specialist knowledge in metal AM that could be used to build the turbines.

Renishaw assisted in designing two parts for Biome. The first was a PowerCone®, a retrofit part that sits on the hub of an existing turbine and improves efficiency by 10-15 per cent by letting the blades rotate at slower speeds. Renishaw also helped produce propellers with a curved design to reduce drag when the blades turn in the water.

These parts were then used to build a prototype turbine, which was tested at Strangford Loch in Northern Ireland. The PowerCone® and propellers were then added to an existing turbine, which was then tested. After the turbine was submerged, the test showed that the modification produced significant levels of power over a wide range of tidal velocities.

“Additive manufacturing allowed us to produce the final parts in two months, which would be unthinkable using traditional methods,” explained Mark Kirby, Additive Manufacturing Business Manager at Renishaw Canada. “The ocean turbine project was not only a great opportunity for us to work with one of our many Canadian customers, it was a chance for us to see how metal AM can improve the efficiency of renewable sources.

“Tidal turbine energy is one of many growing renewable energy markets and it was really exciting to be involved in a project like this,” continued Kirby. “While people often think of metal AM as an expensive venture, the technology allowed Biome to reduce the cost of building the turbine by 80 per cent. We look forward to working on more projects like this and seeing how other companies benefit from metal AM.”

For further information on how additive manufacturing can provide solutions for the energy industry, visit https://www.renishaw.com/en/metal-3d-printing–32084.